Production is a daunting task and one of the more complicated, least discussed elements of esports. Everyone loves good quality streams, but people rarely think or talk about what goes into making everything look shiny and run smoothly. 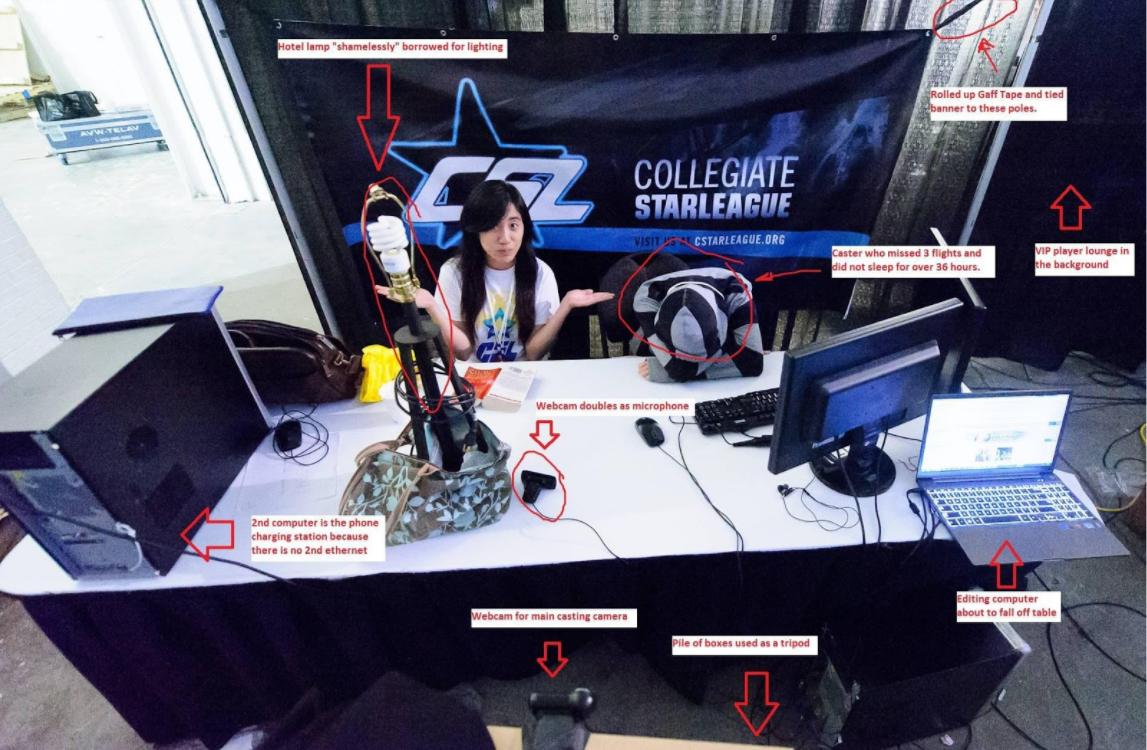 That’s right - we took a lamp from our hotel room and used it as a source of lighting, with two webcams haphazardly placed.

Obviously, we’ve had to step up our game.

The second evolution of CSL’s production came from an old computer that we bought from NASL in their closing auction, which we used to run our broadcast last year at Dreamhack. That went alright, but the computer was old, and we pushed it to its limits trying to incorporate studio cameras to our setup rather than simple webcams.

We needed another evolution to our production capabilities.

This year, we decided to build a new production rig to get exactly what we wanted. The goal was to create a setup that will work today and tomorrow, that can handle an entire production by itself, or be part of an even bigger setup. We spoke to ASUS about our idea and they wanted to help.

Our production rig has:

What else do we have?

At the Midwest Campus Clash, we were able to break out the new machine for the first time to test it out. However, productions require more than just a computer capable of handling a live stream. Here’s some insight into what else goes into producing a gaming event:

For the Midwest Campus Clash, we ran a relatively simple production centered around our new production rig (see above). We had two cameras, our ROG observer computer, and our ROG graphics laptop feeding directly into our production machine. In addition, we connected our sound board to the machine as well, running all of the microphones and the observer computer into it as well so we could manage sound.

Essentially, this setup obviates having a video switcher, which can get incredibly expensive. So, if you’re producing on a non-studio budget, this type of setup is one of the best options. With xsplit and a second monitor, we were able to mimic almost all of what having a studio level kit provides.

All in all, CSL finally has a solid production rig that will take us through many more live events for years to come. With ROG gear, the quality of our production has improved dramatically, and we’re going to continue iterating and getting better with each event. For all of those who are looking to run live productions, hopefully this brief guide provides some insight into how things work!

With that, we’ll close with this video, produced by Columbia College: