For teams that didn’t make it to the Winter Invitational, they competed in a 5 week-long semester to determine the remaining 32 teams that will make it into the playoffs. The teams below were undefeated: 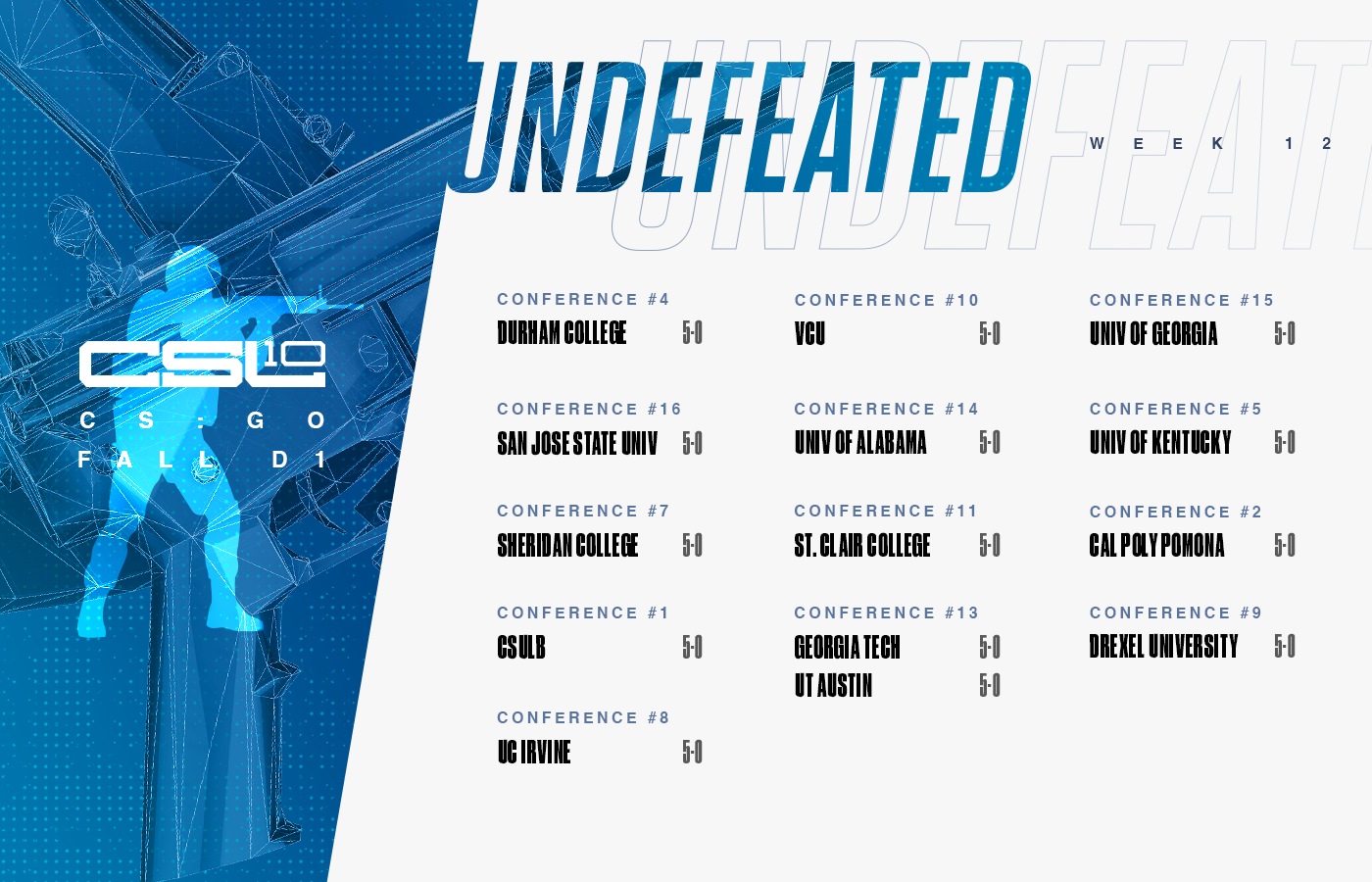 This squad is composed of three players currently competing in an ESEA-Open team (rtb, RVE, Knocked), with Bubby_Q and BcK competing in ESEA-Intermediate and ESEA-Advanced respectively. This team was able to beat Texas A&M, home to players like Gh0st- and HEROXOR, with a 16-11 scoreline. This team has been practicing together on ESEA, so they should be in good form coming into the playoffs.

SJSU CS:GO is looking to make a return to its former glory once held in the 2015-2016 year, where they dominated the scene. Although many of those members are gone now, the future looks bright for the current players, as all of them have played in ESEA-Intermediate and above. They didn’t have any difficult matches during the Spring, but the playoffs will be their big challenge coming up.

This team is composed of players who’ve competed in ESEA-Open. They had a pretty good Spring showing, with a big victory over University of California: Berkeley. They are practicing here and there, which can mean huge potential for them to do some damage in the playoffs.

Long gone are the days of CHAI and decca on CSULB, but new blood have taken their place. With a squad that has a mix of ESEA-Open and ESEA-Intermediate experience, they unfortunately weren’t tested very much during the Spring. These playoffs will be the real test for them.

This team is a full ESEA-Intermediate squad with a 6-2 record currently. Although UCI had a close 16-14 victory over Penn State, there is a lot of potential for this squad. With their time together in match scenarios, it’s will definitely come in handy when they face the tougher teams in the playoffs.

VCU has had a bit of roster shakeup as a result of their account sharing ban, which resulted in Lep no longer being able to participate in this season. CEGUSVTW also retired from the game, leaving Zen and Wolfeye to step in and fill in the gaps. Currently, VCU is still a 6-3 ESEA-Main team, which shows that they’re still a strong team in the scene. They did show some signs of weakness with their overtime game against Ryerson, but I believe they’re going to be a strong team when the playoffs roll around.

University of Alabama has turned things around from last year and have definitely showed huge signs of improvement this year. This team is a full ESEA-Open team with a 8-2 record currently. Although they had a tough overtime game against the University of Waterloo, their other matches this Spring were much more convincing. With more practice and time, these guys will have the ability to surprise in the playoffs.

Georgia Tech has been continuing to solidify themselves as a strong team in the collegiate scene, returning to their former glory ever since the NCeSPA days. As a current ESEA-Open team sporting a 7-2 record, they’ve definitely been putting in the time together as a team. With the time they’re putting together as a team, the other teams in the playoffs should definitely not underestimate them.

Possibly one of the only teams to make it to these playoffs with only one match played, while the rest of their games were all forfeits. As one of the only schools in Canada that offer esports scholarships, there is going to be a certain amount of pressure on their shoulders to deliver. Although they’re not on an ESEA team together, they have been practicing and I have confidence that they’ll have a solid showing in the playoffs.

Most of these players are on the same ESEA-Intermediate team together, where they currently hold a 4-3 record. In the Spring, this team hasn’t been tested very much with extremely convincing victories. In the playoffs though, it’ll be on all the members of the team to step up if they want to make a splash.

The core of Kosonati, Vyatt, niceguy have been around for a while, and they’re set to make yet another appearance in the playoffs. Despite having some very convincing victories in the Spring, they don’t seem to be very active together as a team. I’m not sure what to be expecting from this squad, but they’re definitely going to need to put work in together as a team to be able to contend with these other teams in the playoffs.

It’s great to see UT Austin back in form for another playoffs appearance. KevinWow and DayBeh have been on this team for quite some time, with xpewster and skipspro being more recent members. These players all currently play on an ESEA-Main team that holds a 3-6 record at the moment. With the fact that all of these players still play the game competitively on ESEA, that’s a great sign heading into the playoffs.

This team probably had the toughest games out of any of the other undefeated teams in this article. With scorelines of 16-12, 22-18, and 16-14, their road to an undefeated Spring definitely wasn’t easy. As most of this team has played some matches of ESEA-Open, CPP will be looking to prex to deliver for this team. He’s competed in the ESEA-Advanced division and is a big reason for their victories thus far. If this team wants to go far in the playoffs, it’ll be squarely on the shoulders of prex to step up big.

With only one match played in the Spring, it’s tough to tell how this team will really do. Most of the players on this team have played in ESEA-Open before, with the exception of HamMEE who is currently competing on an 9-0 ESEA-Intermediate team. They have been practicing a little bit together, but it’s hard to know what kind of impact they will really have in these playoffs.